Don’t get me wrong; I’m all in favor of protests and demonstrations to let the powers-that-be know we’re on to them, or raise a little consciousness, or spread the message about something important, or even just for a bit of fun. I like to think my demonstrating against the Vietnam War way back when had some sort of an effect and America didn’t retreat just because they were losing a war they couldn’t win or were running out of cash.

But Occupying Wall Street or anywhere else is rather pointless unless you’re doing it just for fun. For one thing, the enemy is not Wall Street or Bay Street or any other bank street. Sure, the investment banks are a bunch of heartless, obscenely greedy sociopaths, but that’s their job and some of them, Goldman Sacs comes to mind, are extremely effective at separating the suckers from their money.

The real enemies are the faceless oligarchs behind the Federal Reserve and the other central banks of the world. The real enemies are the wealthy families who understand how the central banks are destroying the middle classes and concentrating more power in governments and more wealth unto themselves. The occupiers are idiots playing right into the oligarchs’ hands. The ultra-wealthy would like nothing more than a few token Wall Streeters marched off the plank or to the guillotine or doing the perp walk for the TV cameras because it would deflect attention away from the wealthy elites’ evil doings.

Worse yet, such time-honored “scapegoating” prevents real solutions from being implemented. This misdirection enables the elite to continue printing money from nothing at the altar of the Fed and central banks to continue turning wealth into debt and prosperity into poverty. It certainly won’t create jobs. It won’t prop up real estate values. It won’t solve ANY real problems. That’s why the Occupiers are idiots. 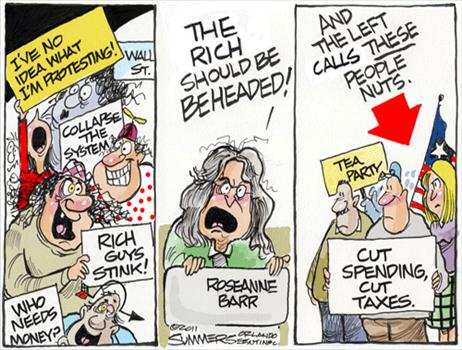 Worse than idiocy is hypocrisy. After all an idiot can’t help being an idiot. They were born that way. However, hypocrisy is a deliberate deception. Judging by their agenda, many of the Occupiers are leftists and socialists, a form of idiocy in itself but it is their refusal to assign responsibility where it belongs that demonstrates their hypocrisy. What follows should be credited to Michael Snyder of Blacklisted News for his article 11 Reasons Why Occupy Wall Street Protesters Are Hypocrites If They Do Not Call For Barack Obama To Resign.

Occupiers noses are out of joint because of the bank bailouts. President Obama engineered more bailouts than Bush so why aren’t they blaming Obama? After all, can you blame the banks for accepting money that Obama offered them? 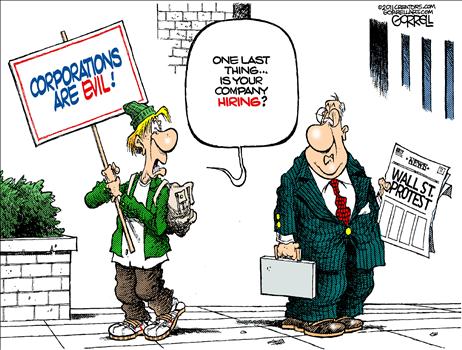 In fact, have we heard any criticism of Obama at all? The Occupiers are upset because Wall Street banks donated large sums of money to the politicians who are supposed to regulate the banks yet they conveniently ignore three of the top seven donors to Obama’s campaign were Wall Street banks: Goldman Sachs, JP Morgan Chase and Citigroup according to OpenSecrets.org.

The protesters say Wall Street has too much political influence. According to Huff Post October 4th article, Michael Brenner, University of Pittsburg professor of International Affairs names half a dozen Wall Street insiders in Obama’s administration. So why is there no criticism of Obama? That’s hypocrisy.

They complain about corruption in the financial system yet ignore the greatest corruptor of all: the Federal Reserve whose Chairman, Ben Bernanke was re-appointed by Obama despite his long string of abysmal failures. So why is there no criticism of Obama? That’s hypocrisy.

Occupiers are angry at corporations for outsourcing so many jobs. In the meantime, the Obama administration is pushing hard for new Free Trade agreements with Panama, Columbia and South Korea which will outsource even more jobs. So why is there no criticism of Obama? That’s hypocrisy.

There is anger over health insurance companies seeking to renege on insurance yet these same companies wrote large parts of Obama’s health care legislation. There is anger about the illegal home foreclosures that the Obama administration has done little about; there is anger that privacy is sold as a commodity yet Obama greatly enlarged the American security apparatus that is destroying privacy. 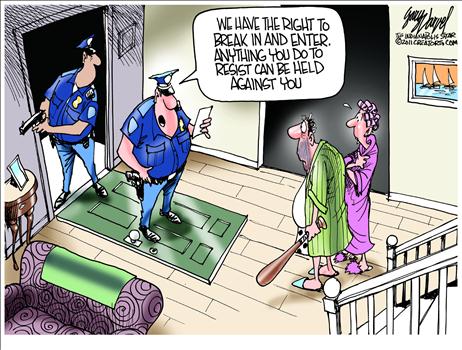 What is sad about the Occupy This, That or Whatever is that it is dividing and polarizing Americans into conservative and socialist ranks at a time when united action is called for. It encourages class warfare that will further divide Americans. It neglects the real problems and plays into the hands of the elite who are the only beneficiaries of these protests. 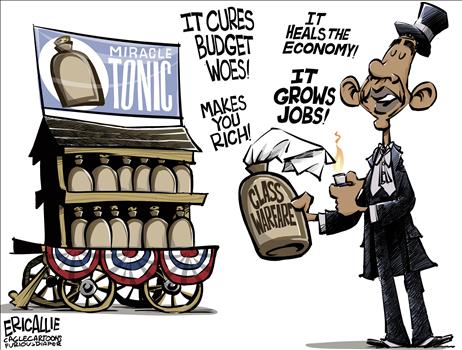 Worse, there is really nothing new in these protests. The Occupiers still haven’t broken out of the left/right paradigm; they still haven’t figured out there is no difference between Republicrats or Demopublicans and it make no difference whatsoever who they vote for. In the end, the oligarchs who own us all and to whom we are all indebted through their central banks are the only winners.

Update- Oct. 15, 2011
It didn’t take long for the “Occupiers” to get co-opted and steered by the Powers-That-Be. Today, even the Canadian mainstream media are leading the charge by announcing that “Occupy (pick a city)” will take place. Of course, they continue the charade that the protesters are “leaderless” and they believe, “that government-abetted corporate greed has served the elite …”

The idiots still haven’t figured out that the enemy are NOT corporations. The enemy is government, particularly the government-sanctioned monopolies; the central banks (like the Fed) that manipulate the price of money (interest rates) and create speculative bubbles, malinvestment and volatility that wipes out savings and pensions, destroys housing values, decimates asset values and kills the middle class which form the basis of our consumer economies. But, I repeat myself.

For more detail on why governments are the enemy, read
I am an Anarchist

I have a bit of financial experience having invested in stocks in the 1960s & 70s, commodities in the 80s & commercial real estate in the 90s (I sold in 2005.) I'm back in stocks. I am appalled at our rapidly deteriorating global condition so I've written articles for family, friends & colleagues since 2007; warning them and doing my best to explain what's happening, what we can expect in the future and what you can do to prepare and mitigate the worst of the economic, social, political and nuclear fallout. As a public service in 2010 I decided to create a blog accessible to a larger number of people because I believe that knowledge not shared is wasted.
View all posts by gerold →
This entry was posted in News & Views and tagged Obama, Occupy Wall Street. Bookmark the permalink.