The Book of Eli and The Road: Movies VS Reality

The movie, The Book of Eli with Denzel Washington – I just can’t get it out of my head although it’s been two years now. Long ago I’ve learned to listen to my instincts (subconscious) because the only time it’s wrong is when I ignore it.

I’ve seen many post-apocalyptic movies over the decades but none hit home like this one. Perhaps it is beginning to mirror the times we live in. The original Mad Max movies were sanitized, Hollywood versions with little depth and even less basis in reality. They were almost cartoonish as are many other movies of this type although ‘The Road’ with Viggo Mortensen is another exception that drills home the personal horrors of social breakdown and the desperation of survival.

I don’t necessarily endorse the religious basis of The Book of Eli – he being the modern avenging prophet of God with guiding visions and divine protection. However, it doesn’t detract from the accuracy of the movie’s post-apocalyptic vision (let’s hope it’s not a prophecy.) The film shows the breakdown of humanity’s civilized behaviour and the impact on the survivors. In a situation like this, the dead are the lucky ones (in the movie it’s the hanged man Eli comes across.)

We have NOT had an apocalypse. I hesitate to add the word “yet.” But we do not need a major apocalypse to see how thin the veneer of civilization really is and how little it takes to crack and destroy it. Look at the breakdown of Iraq after the Americans destroyed its social fabric. Haiti shows how close chaos is even after a natural disaster. In both cases, the damage is somewhat mitigated because the rest of the world still has the ability to support them. Imagine, if you can, how much worse both of these cases would have been if the rest of the world were in the same condition and unable to provide support.

The Book of Eli shows how people shed civilized behaviour in order to survive with no social order or constraints on behaviour. In the movie, even the nice couple survive only by cannibalism. I urge you to see both these movies so you aren’t blindsided in future as the global economic fabric continues to disintegrate. We see modern high tech armies overwhelmed by simple tribesmen who do not require complicated operational systems. We see venal Wall Street oligarchs unconscionably and brazenly robbing Americans of their future. We see businesses desperately trying to survive not only by slashing jobs but divesting themselves of the very culture that made them, and losing the experience and wisdom that they will need to survive in future.

If you don’t see death spirals everywhere then you aren’t paying attention. I’ve been watching this slow-motion train wreck for 5 years now. Wait for the U.S. socio-political breakdown as the promised recovery fails to materialize again (remember “green shoots”?) and the pre-election spin and hype wears off after this coming November’s Presidential election. You can’t help but notice the idiots that the Republicans put on display because they know better than to have their man win and be blamed for the coming collapse. Two terms of Obama Democrats and few will blame the Republicans for their contribution to America’s continuing economic disaster. 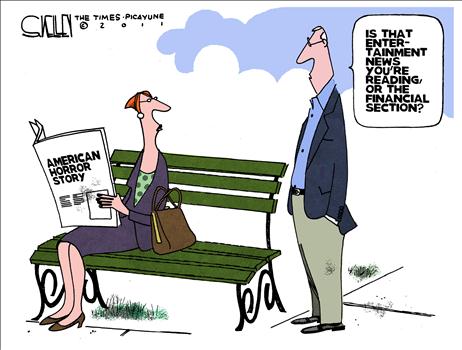 Make no mistake; I am NOT predicting the apocalypse. At least, not for Canada. At least not yet. There, I said it. The Stanley Cup riots in Vancouver last year and the London, Ontario St. Patrick ’s Day riot last week clearly prove that it is NOT different here. Canada, the “kinder, gentler nation” is not immune to social breakdown. So far, these have been isolated incidents. Wait for a summer of labour unrest as insolvent Canadian federal and provincial governments try to enact austerity measures.

We will see a lot more economic deterioration in the developed world so Canada cannot escape the consequences. China is slowing and needs fewer of our resources. Australia, the other resource powerhouse is seeing its residential real estate bubble bursting. Canada won’t be far behind. No one knows if it will be a soft landing or a hard one but bubbles rarely burst softly.

The Masters of the Universe are promising a recovery but these are the same clowns who failed to forecast the economic downturn in the first place, then were continually surprised by its depth and duration, and stood by while the financial oligarchs robbed the middle class of it pensions and future. Are you going to believe their recovery forecasts?

Warning: although these two movies may become cult classics, these are not happy movies. The Road’s final scene tries but fails to find cheer. And despite Eli’s successful mission, he won’t be around to see the brave new world they are struggling to build. How many of us will be?

See The Book of Eli for a wake-up call. See The Road. See them both, just not back-to-back. That would be too depressing, no pun intended.

Your comments are WELCOME!
.
If you like what you’ve read (or not) please “Rate This” below.
.
Lengthy comments may time-out before you’re finished so consider doing them in a word doc first then copy and paste to “Leave a Reply” below.

I have a bit of financial experience having invested in stocks in the 1960s & 70s, commodities in the 80s & commercial real estate in the 90s (I sold in 2005.) I'm back in stocks. I am appalled at our rapidly deteriorating global condition so I've written articles for family, friends & colleagues since 2007; warning them and doing my best to explain what's happening, what we can expect in the future and what you can do to prepare and mitigate the worst of the economic, social, political and nuclear fallout. As a public service in 2010 I decided to create a blog accessible to a larger number of people because I believe that knowledge not shared is wasted.
View all posts by gerold →
This entry was posted in News & Views and tagged denzel washington, post-apocalyptic movies, social breakdown, social collapse, Survival, The Book of Eli, The Road. Bookmark the permalink.

1 Response to The Book of Eli and The Road: Movies VS Reality