France Could Trigger a Global Collapse

Keep your eyes on the French Presidential election because the results could trigger another global financial collapse. Incumbent President Sarkozy is very unpopular and Hollande, his likely replacement, is a raving socialist who is pandering to the masses with wild promises.

Why worry about some European election? Being a political science major, I know enough to ignore elections (“it only encourages the bastards”) and I’m usually even less interested in European elections. But, this time it really is different.

Here’s why. The U.S. sovereign debt per capita is higher than any country in the European Union. Every American citizen owes more federal debt than any European citizen. See this chart below.

In fact, U.S. per capita debt is even higher than Greece, Italy or Ireland. However, our media propaganda has focused all eyes on Europe right now in an attempt to divert attention from the American mess. Remember, reality is perception. Here’s a perspective on runaway American debt. 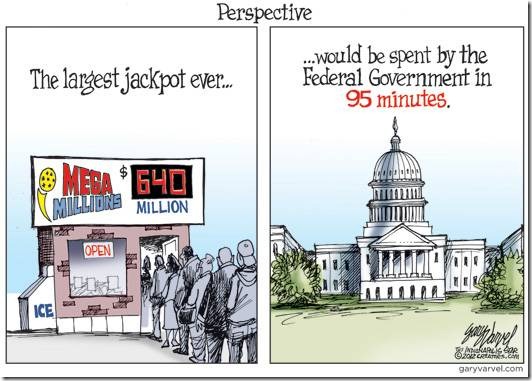 Also, remember that the last Great Depression started in the U.S. and then infected Europe. The worst financial collapse occurred when a small Austrian bank went belly-up and the Austrian government was too broke to bail it out. That caused major European banks to collapse and the contagion quickly spread back to the U.S. triggering a deeper slide into the Great Depression. History might not repeat itself, but it often rhymes.

In the first round of the French Presidential elections this past weekend, Sarkozy got only 27.1% of the vote VS Hollande with 28.6%. Anything less than 50% triggers a second round of voting on May 6.

What make Holland so dangerous? His irresponsible and unrealistic promises threaten to trigger a financial stampede. France’s debt is rapidly approaching the point-of-no-return of 90% of GDP so the last thing France needs is someone rocking the boat. What France DOES need is a steady hand on the helm of the third largest economy in Europe.

Hollande proposes taxing anyone with an income over a million Euros at a rate of 75%. France already has an enormous Value Added Tax (sales tax) of 25% which effectively taxes the rich at 100% of income. The UK once tried a 90% tax and the rich fled in droves. Back then, the global economy was not poised on the brink like it is today.

Not that Hollande’s proposals would help France’s debt significantly (remember the cartoon above) and he admits as much but lamely says it’s the “moral” thing to do. A politician with morality? Give me a break! It’s nothing but an election ploy and a dangerous one at that. Wait! There’s more.

In addition, he’s proposing to dial back the retirement age recently increased from age 60 to 62. He’s threatening an increase in corporate tax to 35% PLUS end austerity measures.

Of course, politicians rarely keep their promises once they’re elected. But, that’s not the point. What’s important is the panic this could create in the financial markets. And, you may not have until May 6 before covering your butt. Once the pundits and handicappers announce that Hollande is likely to beat Sarkozy, the stampede may start well before May 6. Businesses, investors, entrepreneurs and the rich may start a capital flight out of France before the May 6 run-off election. This would send a shock wave through France and the rest of the Eurozone greater than anything we’ve seen yet.

I am NOT predicting this will happen. I can’t see the future. However, I do have a knack for connecting dots and these dots are lining up badly. So, if you’ve been putting off getting your financial house in order, diversifying investments, buying gold or silver (cheap right now) or even keeping cash on hand, I would do it sooner rather than later.

Your comments are WELCOME!
.
If you like what you’ve read (or not) please “Rate This” below.
.
Lengthy comments may time-out before you’re finished so consider doing them in a word doc first then copy and paste to “Leave a Reply” below.

I have a bit of financial experience having invested in stocks in the 1960s & 70s, commodities in the 80s & commercial real estate in the 90s (I sold in 2005.) I'm back in stocks. I am appalled at our rapidly deteriorating global condition so I've written articles for family, friends & colleagues since 2007; warning them and doing my best to explain what's happening, what we can expect in the future and what you can do to prepare and mitigate the worst of the economic, social, political and nuclear fallout. As a public service in 2010 I decided to create a blog accessible to a larger number of people because I believe that knowledge not shared is wasted.
View all posts by gerold →
This entry was posted in Collapse 2012, Economic Collapse and tagged election promises, financial collapse, French elections, french presidential elections, Hollande, media propaganda, Sarkozy, sovereign debt. Bookmark the permalink.