Governments’ fictitious inflation statistics conceal our shrinking economies. All western governments are “cooking the books” and lying about inflation thus disguising our unraveling economies. The real inflation rate in the U.S. is about 9% according to John Williams’ Shadowstats and the real Canadian inflation rate is about 7% as I explained in Non-Recovery Alert. Most other western countries are somewhere in the same range.

Before going any further, let’s define inflation as a rise in the general price level of consumer goods and services over a period of time and the Inflation rate is the annualized percentage change in CPI ( Consumer Price Index ) over time. There is considerable debate about the finer points of inflation but, for our purposes this general definition will suffice.

We are told that our economies are limping along at 1% or 2% growth. That’s bullshit! Our economies are SHRINKING. The official GDP growth statistics are adjusted for the official (bullshit) inflation rate. They are NOT adjusted for the real inflation rate. Adjusted for the real inflation rate, the U.S. economy is shrinking (round numbers) 1 – 9 = 8% a year and Canada is shrinking 2 – 7 = 5% a year. With the magic of compound interest, the U.S. economy has shrunk almost 50% over the last five years alone. Canada has shrunk almost 30%. THAT is the Stealth Depression I have been warning about for more than five years.

The chart below illustrates the magic of compound interest. Note: this is based on the government’s official inflation statistics. Inflation calculation methodology began to be ‘cooked in the 1980’s and again in the early 1990’s. In other words the climb would be even steeper had they continued using their original (uncooked) calculation methods.

Whatever you could purchase with $100 CAD in year 1914, you have to spend $1,948 Canadian in 2010 to purchase more or less the some goods. And that’s based on cooked numbers. Using the real inflation rate you’d have to spend much more.

The American inflation chart looks even worse but it illustrates when inflation really took off; 1971, the year “Tricky Dicky” (President Richard Nixon) took the U.S. off the gold standard and forced the rest of the world to follow.

GDP shrinkage of 30% to 50% are startling numbers but they’re concealed by governments’ and the ass media’s smoke and mirrors, lies, deceptions, propaganda and fictitious statistics. Turn the above two charts upside down and they represent our incredible shrinking economies.

And it’s not just Canada and the U.S. that experienced rapid inflation and shrinking economies. Below, Australia, the UK and the Eurozone are almost identical as are ALL western economies; taking off after 1971.

In fact, the continuing melt-down of our economies can be seen in the government’s own numbers. The chart below is Stats Can (Canadian) bullshit inflation rate. Ignore the nominal percentages; they’re cooked. Instead, look at the over-all trend that indicates continuing economic melt-down.

How’s that for an incredible shrinking economy when even the government’s own cooked statistics are trending down.

The Financial Post reports that “Investment guru Jim Rogers has criticized Western central banks for understating the true inflation rate which he says is “certainly” at least 6 or 7%.”

Inflation distorts so much. We’re told retail sales are limping along. In reality they’re plunging when real inflation is factored in. Wage and Social Security increases are tied in to the official inflation rate but the real inflation rate is shrinking our incomes. Just about every economic measure is far worse when you factor in the real rate of inflation. We are in a Stealth Depression disguised by phony government statistics.

Stock Markets are Not Economic Indicators

Western economies are melting down and the only thing central banks and their stooge banksters can do is artificially manipulate the stock markets such as the DOW reaching a record high giving the impression of economic recovery. Don’t believe it. Zero Hedge recently did a report card on the U.S. economy comparing today’s economic conditions to October, 2007, when the Dow set its previous record high.

Look at stock markets another way. Above, I explained the extent of inflation. Gold and silver protect you against the loss of purchasing power caused by the insidious effects of inflation. Look at the stock market, not priced in devaluing dollars but priced in gold. It takes more worthless dollars to buy the same thing so the ‘nominal’ price of stock markets makes it appear they are reaching record highs. However, the DOW stock market (and all others) are declining when priced in REAL money: gold. 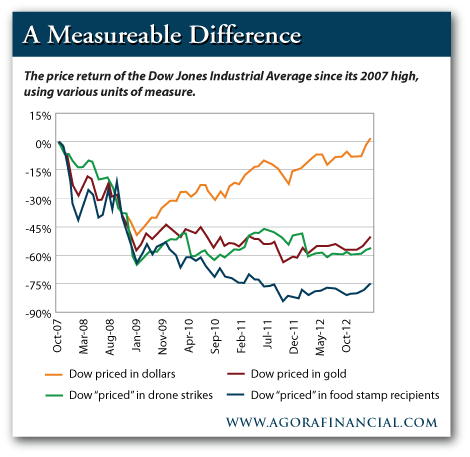 The chart above shows the DOW priced in dollars, gold and a few other interesting indicators. Compare the DOW in dollars and then to gold and you’ll see. Eric Fry sums it up like this. “Each of these metrics, in its own way, reflects a government that is “hard at work.” The fact that the Dow, priced in gold, remains very far away from a record, suggests that Chairman Bernanke is working overtime. His dollar-printing escapades have played a very big hand in the Dow’s record-setting climb. By devaluing the dollar, in other words, Bernanke “inflated” the Dow price.

“The doubling of both food stamp participation and drone strikes during the last five years reflects a different form of governmental hyper-activity. But this hyper-activity shares the identical DNA as Bernanke’s money-printing. All these activities express the genetic traits of a government that continuously expands its power ‘for the greater good,’ a government that believes its influence enables progress, rather than impedes it, a government that considers itself so essential to the march of human civilization that it will dehumanize any individual and sanction any uncivilized act to achieve its objectives….”
.

The ass media seems eerily quiet about Cyprus lately. They don’t want you to panic.

I WANT YOU TO PANIC!

Cyprus is proposing the theft of a portion of people’s bank accounts. I’ve already written about this last week in Bank Run Alert so I won’t repeat myself. If you haven’t read it, it’s only four pages.

The Cyprus bank account theft is a wake-up call to those of you who think it can’t happen here. In the first place, it already IS happening here. What do you think our zero interest saving rate is doing? It’s robbing savers. It’s estimated that U.S. savers are losing $400 billion every year that central banks keep interest rates near zero. What should have been a decent saving rate is being siphoned off to the sociopathic banksters to help bail them out of their worthless derivative assets. It’s NOT enough. $400 billion is a fart in a windstorm compared to hundreds of Trillions in worthless derivatives.

In the second place, it shows the continued deterioration of global economies and how quickly things are unravelling. According to Macleans March 25. “Brazil is a mess,” says Manuel Molano, adjunct-director of the Mexican Institute for Competitiveness … “China is decelerating, India’s growth has been stalled for three years, Russia is nothing special.”

Bank accounts were supposed to be protected by government insurance and now governments themselves are complicit in the theft of these bank accounts. It will spread. They’re already talking about doing it to Spain and it WILL spread from there.

Trust Zero Hedge to have a few choice words about the events in Cyprus.

“… the curtain has been pulled back and wizard revealed with all his faults and warts. The age of innocence is dead and with it died institutional and retail trust, confidence in the system writ large and the rule of law.

“It would be hard to over-emphasize how significant the Cyprus situation is. The EU demonstrated under no uncertain circumstances that they will destroy the rule of law to maintain their own power. It was a recognition of tyranny that many of us have always assumed was the case but yesterday became reality.

“So, of course, the powers that be in Europe must do everything in their power to prevent the world from noticing that their banks are broke. This means they will lie and take anything they deem necessary. Including the forceful seizure of savings accounts of innocent people. “

ALL governments are running out of options, not just European. They are stealing from their own citizens and the theft will increase and become more brazen. Confiscation is already happening in broad daylight.

There are two types of people:

Which one are you?
. 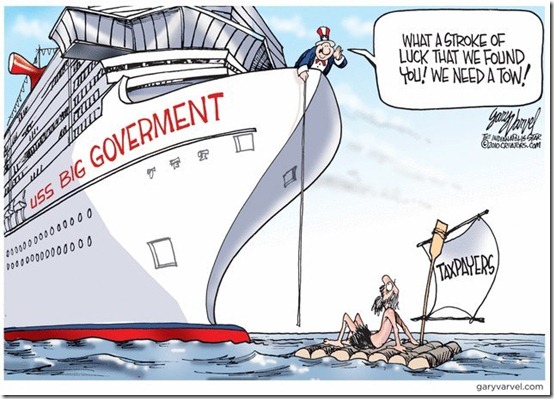 If you’re Amerikan, you need to get your money out of the U.S. or, at the very least, out of the hands of the government. No country is safe but some are safer than others. Think this can’t happen in the U.S.? It already has happened in the past. Zero Hedge goes on to say, “In fact it has already been done before during FDR’s first 100 days in office. The template already exists. Electronic banking only makes the process that much easier.”

That means taking it out of banks and putting it under the mattress where it’s safer from insolvent banks and desperate governments. Simon Black of Sovereign Man says it well, “Insolvent commercial banks are backed up by insolvent government insurance agencies, funded by central banks that conjure money out of thin air.”

You’re not earning anything in interest and keeping it under the mattress makes it harder for the government to confiscate. I say “under the mattress” figuratively as you still literally need to find safer places.

If you’re wealthy get it out of the country. If you aren’t, then buy gold and silver or use money to buy stuff that you’ll need in future. Be prepared to pay a hefty premium buying gold and silver. The spread between the official price and the real price is increasing.

Pension plans are not safe anymore, either. Argentina is talking about confiscating pension plans and the Amerikan government is also running this up the flag pole. The reason they give is that people aren’t capable of making good investment decisions with their 401k so the U.S. government is talking about nationalizing pension plans. Since China and other countries have reduced their purchases of U.S. Treasury bonds, I suspect Amerikan pensions will end up in government bonds just as the bond bubble appears ready to burst. I’m reading a lot of Amerikan commentary (including Jim Sinclair) advising people to cash in their pension plans, take the tax hit and keep it out of banks.

This is serious, boys and girls. And, it’s going to get a lot more serious. For those of you who have been waiting for the shit to hit the fan; it just did.

By tomorrow, Monday, March 25, the Cyprus government has to come up with a plan. What they do, will go down in the history books. It WILL affect all of us.

I have a bit of financial experience having invested in stocks in the 1960s & 70s, commodities in the 80s & commercial real estate in the 90s (I sold in 2005.) I'm back in stocks. I am appalled at our rapidly deteriorating global condition so I've written articles for family, friends & colleagues since 2007; warning them and doing my best to explain what's happening, what we can expect in the future and what you can do to prepare and mitigate the worst of the economic, social, political and nuclear fallout. As a public service in 2010 I decided to create a blog accessible to a larger number of people because I believe that knowledge not shared is wasted.
View all posts by gerold →
This entry was posted in Collapse 2013, Economic Collapse and tagged confiscation, Cyprus, DOW, Economic Collapse, inflation, insolvent banks. Bookmark the permalink.

5 Responses to Our Incredible Shrinking Economies