Recent financial problems at an obscure mortgage provider called Home Capital Group demonstrate that Canadian residential real estate is worth only half current market value. If you’re considering selling your Canadian home, do it now at the peak of the bubble while you can still get top dollar. If you wait, you’ll regret it.

The opposite applies to buyers. If you buy now, you’re buying at the peak of the bubble. Instead, wait for the bursting bubble to reduce prices. This seemingly contradictory advice is possible because of the “Greater Fool Theory.” [Link] This works only when prices are going up, not on the way down.

The tiny house pictured below recently sold for C$1,050,000 in Toronto. 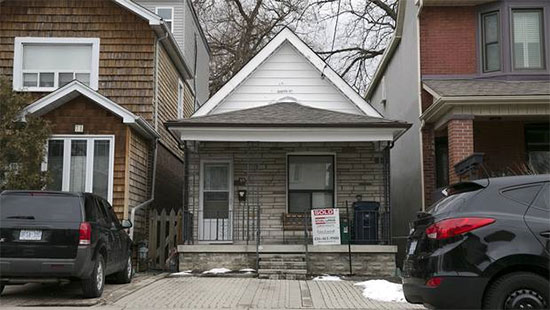 According to Casey Research, “That’s 63% more than the property was appraised for in January 2016. As if that weren’t crazy enough, this property sold for C$370,000 above list price after only being on the market for ten days.”  [Link]

And, it’s not just Toronto and Vancouver. In B.C., the contagion reached urban centers as far from Vancouver as Kelowna and in Windsor, “330 km away from Toronto, home prices have been climbing by roughly 11 percent year over year.” [Link]

Average Canadian house prices are up 63% since 2008 as you can see below.

To see how divorced from reality the Canadian housing market is, the chart below compares house prices to average annual income, in other words ‘affordability.’

If house prices escalate beyond incomes, this cannot continue.

To further illustrate this madness, the chart below shows that Canadians are more indebted than Amerikans were at the top of the last U.S. housing boom.

Yeah, it’s different this time (sarcasm.) Numerous reasons are given to facilitate this delusion.

Pro – We’re saved because the tightening of mortgage rules reduced amortization limits, raised down payments and introduced a stress test for mortgage applications. As well, Vancouver and Toronto added a 15% foreign homebuyers’ tax.

Con – There are many ways around this. Home Capital Group isn’t the only creative Canadian mortgage lender relying on shady practices. And, don’t forget that everything the government touches turns to crap. 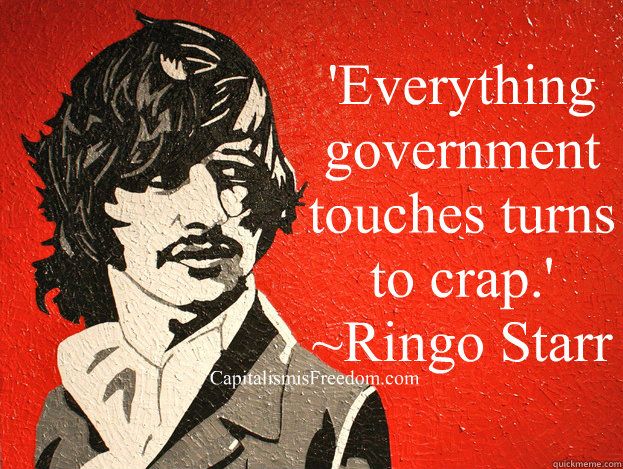 Governments are not proactive; they’re reactive, and when they finally act they’re usually too little, too late and the results are usually exaggerated.

Pro – Loans are mostly recourse, as compared to the U.S., so a wave of defaults is unlikely.

Con – It’s not that straightforward. Eleven U.S. States are non-recourse, “but have recourse in collecting on other mortgages, such as a refi.”  The remaining 39 recourse states have differing laws. [Link]

Pro – The strengthening economy and surging home prices increase the likelihood that the Bank of Canada will hike interest rates before too long.

Con – The bust in Canada’s oil patch is weakening the economy as is China’s decreased demand for commodities. As well, the B of C cannot raise rates for fear of further dampening this weakening economy. Furthermore, the Federal government cannot bear the increased carrying cost of its enormously expanding debt under the Liberals.

Pro – Canada does not have Ninja loans (No Income No Jobs or Assets) like the Amerikans did.

Con – Canada’s Mortgage and Housing Corporation (CMHC), similar to the U.S. FANNIE MAE, encourages big banks to lend maximum amounts to subprime buyers just like the U.S. before its housing crash. Canada, too, has its “liar loans” as Wolf Richter reported as long ago as July 2015. [Link]  Not only can it happen here, but it already did as you’ll see below.

Home Capital Group is Canada’s largest alternative or non-prime lender providing mortgages to home buyers turned away by traditional banks such as the self-employed or new Canadians with a limited credit history. Home Capital relied on depositors to fund their mortgages through high-interest savings accounts.

In July 2015 Home Capital disclosed it had “fired” 45 mortgage brokers after discovering they were engaged in “liar loans” falsifying incomes or fudging employment information to obtain a mortgage. Depositors slowly began withdrawing their savings. That has now turned into a ‘bank run.’ At the end of April, only $293 million in savings remained from more than $2-billion a month before. [Link] And, the run continues in the chart below.

As well, investors began cashing out, and the company’s share price plunged 78%. [Link]

The Healthcare of Ontario Pension Plan (HOOPP) bailed out Home Capital with a $2 billion loan. HOOPP doesn’t view the loan as risky because the pension plan will receive $2 worth of mortgages as collateral for every $1 it lends to Home Capital. [Link] There you have it. The word is out. HOOPP is comfortable valuing Canadian real estate at half its book value. Canadian housing is worth 50%.

Not All Bubbles are Created Equal

Put the emphasis on “far from” because “Even in Windsor, some 330 km away from Toronto, home prices have been climbing by roughly 11 percent year over year … A similar phenomenon is underway in B.C., where contagion is reaching urban centers as far from Vancouver as Kelowna.” [Link]

Credit rating agency Moody’s downgraded Canada’s big six banks (TD, BMO, BNS, CIBC, RBC & National) on concerns about soaring household debt and housing prices. “Continued growth in Canadian consumer debt and elevated housing prices leaves consumers, and Canadian banks, more vulnerable to downside risks facing the Canadian economy than in the past … debt held by consumers and private businesses in Canada has ballooned to 185 percent of GDP at the end of 2016, up from 179.3 percent in 2015.” [Link] In comparison, U.S. debt maxed at 163% before the ‘Great Recession’ of ’08.

In March, two of the banks BMO and TD raised alarms over Toronto’s housing bubble. [Link] Then we had Home Capital Group’s woes outlined above. Now we have Moody’s downgrade.

Declining home prices affect consumer spending through “the wealth effect” where people feel wealthier and splurge when home prices are going up, but this works in reverse when house prices decline. As Canada is long overdue for the next recession, this will make it worse.

This is not to say that Home Capital’s woes will cause another Great Recession, but it certainly smells like a made-in-Canada black swan. Since housing and related industries make up more than 12% of Canada’s economy and half (yes, half) of economic growth, [Link] any housing decline will have significant repercussions on Canada’s overall economy. This is especially worrisome given that Canada is long overdue for another recession especially now with China’s credit market rolling over and dampening demand for Canada’s commodities. A bursting housing bubble will indeed make it much worse.

As an old colleague in finance used to say, “Govern yourself accordingly.”  Consider yourself warned.

I will continue renting and ranting.

If you like what you’ve read (or not) please “Rate This” below.

I have a bit of financial experience having invested in stocks in the 1960s & 70s, commodities in the 80s & commercial real estate in the 90s (I sold in 2005.) I'm back in stocks. I am appalled at our rapidly deteriorating global condition so I've written articles for family, friends & colleagues since 2007; warning them and doing my best to explain what's happening, what we can expect in the future and what you can do to prepare and mitigate the worst of the economic, social, political and nuclear fallout. As a public service in 2010 I decided to create a blog accessible to a larger number of people because I believe that knowledge not shared is wasted.
View all posts by gerold →
This entry was posted in Collapse 2017, Economic Collapse, Uncategorized and tagged black swan, Canadian housing, Canadian housing bubble, Canadian real estate, Casey Research, Great Financial Crisis, Great Recession, Healthcare of Ontario Pension Plan, Home Capital Group, HOOPP, Moody’s, Wolf Richter. Bookmark the permalink.