I am an Anarchist

Ok, so what’s an anarchist? I’m glad you asked.

There are as many definitions of anarchy as there are anarchists. There have been a multitude of anarchists; Bakunin, Emma Goldman, Kropotkin, Proudhon to name a few. There is no well-defined and generally accepted theory of anarchism because most anarchists spent their time manning the barricades or pamphleteering or rotting in jail to waste time on political theory. Search ‘anarchy’ on the internet and you’ll find as many definitions as there are web sites. This is as it should be and true to the nature of anarchy.

As a political science major, this is my understanding of anarchy. The word ‘anarchy’ comes from the Greek word ‘Anarchia’ meaning “without ruler”. Anarchy is simply the absence of government. There are many things anarchy is NOT. It is not political disorder; it is not chaos and it is not lawlessness although anarchy can arise from such conditions.

So, if that is what anarchy is NOT, then what is it? The best definition of anarchy I have ever seen comes from the late historian, Arnold Toynbee. He said anarchy is, “a political system based on cooperation among various groups or federations of people through mutual self-interest without the need for an external state”.

That’s a mouthful! Let’s break this down into understandable parts.

1) Political system is a union of individuals sharing a common goal.
2) Cooperation is a process of working or acting together.
3) Groups or federations are various political systems.
4) Mutual self-interest are goals that benefit everyone or every group.
5) Without the need for an external state means without government.

Anarchy as a popular movement gained its greatest strength in the 19th Century. Governments retaliated with a massive propaganda effort. Bomb-throwing terrorists were branded as anarchists. The assassination of Arch-Duke Ferdinand that sparked the First World War was said to be committed by an anarchist. The so-called “free press”, being part of governments’ propaganda machine, actively supported this propaganda and continued discrediting anarchy and anarchists. Their efforts were successful. Today we use the words ‘anarchy’ and ‘chaos’ in the same sentence to mean the same thing as if they were synonymous.

Dictionary definitions are rife with false notions of anarchy. Webster calls it, “uncontrolled political confusion and disorder”. The Oxford English Dictionary calls it, “a state of lawlessness due to the absence or inefficiency of the supreme power; political disorder.” However, to Oxford’s credit, their “B” definition is more accurate, “A theoretical social state in which there is no governing body of persons, but each individual has absolute liberty (without implication of disorder).” It is noteworthy that Oxford calls it a ‘theoretical’ state. More on this in a moment.

It’s true that anarchy can result from chaos but that does not mean anarchy is synonymous with chaos. Anarchy can arise from chaos. Anarchy can be the first step in reorganization after the collapse of an economy or a nation or civilization itself. People band together for mutual protection. These groups can then cooperate among each other for their mutual self-interest. This is Toynbee’s definition of anarchy. This has happened numerous times throughout history. However, these groups never last long before they are either destroyed or co-opted by government.

Anarchic groups can also arise without chaos or collapse. These groups have formed to fill a need that governments are unable or unwilling to address. For instance, governments are very efficient in slaughtering people in war but they are very inept at taking care of their own wounded. Throughout history, anarchic free organizations like the Red Cross have sprung up to care for the wounded, hospital associations formed to care for the sick and lifeboat associations attended to floundering ships and rescuing sailors. Inevitably, these groups are co-opted by governments with their endless laws, regulations and cronyism until the effectiveness of these groups is compromised.

Some anarchist wannabe’s fail to understand anarchy. It’s not about resistance, rebellion or revolution. History has taught us that many revolutions such as the French Revolution end up eating their own and ushering in a murderous tyrant like Napoleon even worse than the one the revolutionaries deposed or the Russian Revolution and the tyrant Stalin who murdered 40 million or the Chinese revolution that produced Mao responsible for slaughtering 60 million.

It’s not about eating the rich or tearing down society. It’s more than Occupy Wall Street demonstrations which run the risk of becoming just a safety valve at the least or at the worst, a Trojan Horse and co-opted by the powers-that-be. See Occupy Wall Street – Idiots & Hypocrites .

One hopeful sign of the Occupy Wall Street demonstrations is this one protestor who has a much better sense of the real source of the problem i.e. the Fed & central banks.

In fact you don’t have to do much except watch systemic entropy do your work for you. That’s when the anarchist’s work starts; when we start to rebuild from the rubble and ashes.

I used to consider myself a Libertarian; a philosophy that holds liberty as the basic moral principle of society and strict limits to government activity. Life has shown me that governments are stupid and evil and, worst of all, they grow like cancer. You cannot maintain strict limits to government. It is a monster that eats its young and grows ever larger until finally it consumes itself. This is what we see happening in the western world today; governments facing insolvency, people losing confidence, and economies melting down. Greece is a good example of government run amok with 25% of its workforce employed by government.

There is little that governments do that cannot be done better, cheaper and faster by private entities except perhaps national defense. However, in the end, true anarchy is a pipe-dream: an ideal or as the Oxford English Dictionary calls it, “a theoretical state” . Anarchy cannot last, nor should it. It’s a transition from chaos to organized life. And, small groups grow larger. Small organizations become small governments which, in time become large governments which inevitably become huge until it all falls apart and the process starts all over again. 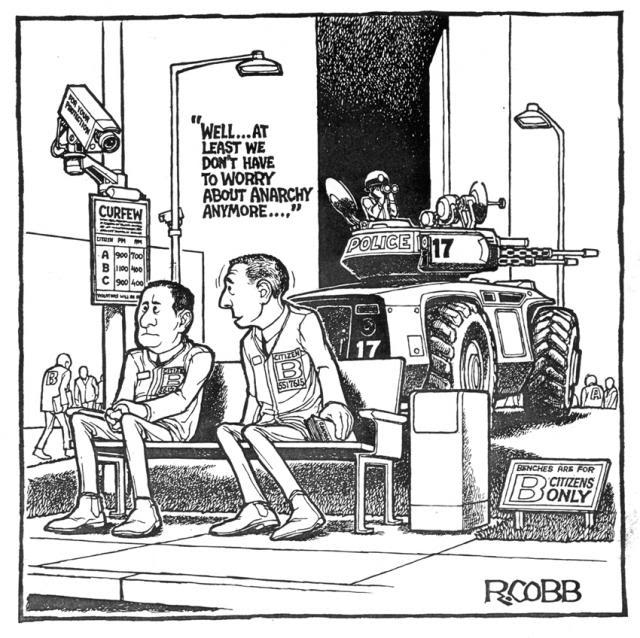 We may never rid ourselves of governments entirely but we must not forget the anarchic ideal. We must strive for smaller government, lower taxes, less interference, fewer laws and less regulation. Given the trajectory of economic conditions, you may not have to be an anarchist to realize these ideals. The slow-motion global economic melt-down and the inevitable sovereign collapses we will see in the future may hasten the collapse of governments and the rise of anarchy. I hope you’re ready to stand on your own feet because if you rely on government, you’ll be living your life on your knees.

P.S. it is worth noting I am writing this on Canada’s Thanksgiving. I give thanks that we still have enough freedom and liberty to allow me to write and publish this without fear.

I have a bit of financial experience having invested in stocks in the 1960s & 70s, commodities in the 80s & commercial real estate in the 90s (I sold in 2005.) I'm back in stocks. I am appalled at our rapidly deteriorating global condition so I've written articles for family, friends & colleagues since 2007; warning them and doing my best to explain what's happening, what we can expect in the future and what you can do to prepare and mitigate the worst of the economic, social, political and nuclear fallout. As a public service in 2010 I decided to create a blog accessible to a larger number of people because I believe that knowledge not shared is wasted.
View all posts by gerold →
This entry was posted in News & Views and tagged anarchism, anarchist, anarchy, Arnold Toynbee, Libertarianism, Mao, Napoleon, Occupy Wall Street, Stalin. Bookmark the permalink.

9 Responses to I am an Anarchist