Someone finally came up with a name to describe the American 2012 election: Electile Dysfunction: the inability to become aroused over any of the choices for President put forth by either party in the 2012 election year.

This is becoming so obvious that the December 5 issue of Macleans magazine headlines it as “American idiots” and by-lines the question “How did the campaign for the Republican 2012 presidential nomination turn into such a joke?” I answered this rhetorical question in the second paragraph above: they don’t want to win. Even Sarah Palin has been told to drop out of the race lest even she defeat Obama.

Don’t be fooled by the presstitutes so-called economic news. The U.S. perpetual election circus is entering the final year of the presidential election and the propaganda will be spun hard and fast. Last week’s headlines reported that 120,000 jobs were created.

On the surface this sounds positive. Dig a little deeper and you’ll see the similarities with the last Great Depression of the 1930’s. That too started with a recession, then a mild recovery before plunging into a major and prolonged recession. Nobody called it the “Great Depression” then either. It wasn’t so named until the 1950s.

Digging a little deeper into the employment numbers reveals the grim truth.

3) And that does NOT accommodate continuing population growth. To accomplish that would need about 50 million new jobs. How likely is that?

It’s been said, “There are three kinds of lies: lies, damned lies, and statistics.” You can bet the statistics you get from the ass media are damned lies. Look at this graph of the number of people not in the labor force. Does that look like improvement? 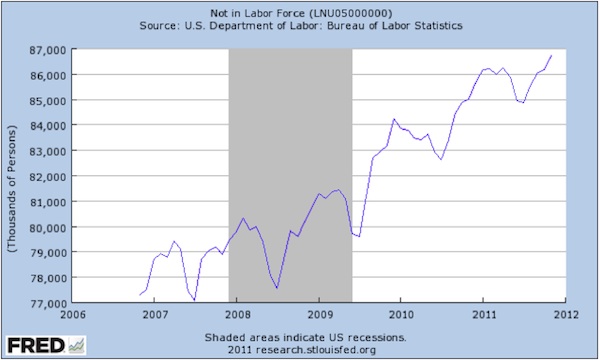 Europe sovereign debt problems are distracting attention from America’s huge debt. Proportionate to economic size, the U.S. is in deeper debt than Greece and U.S. debt is increasing at a faster rate than Greece. At least Greece is talking about austerity and cutting spending. The U.S. Super Committee utterly failed to find ways to rein in American debt.

Riding to the rescue last week, major western central banks provided more liquidity to the European Central Bank last week. Liquidity is a fancy word for creating money out of thin air. However, as I’ve said numerous times already, the problem is not liquidity: the problem is insolvency. Practically every government in the world is broke, bankrupt, finished, under water and doomed to collapse. There is NO FIX. You can’t fix debt with more debt. There is simply too much debt. This liquidity injection does not fix the problem. It merely postpones the inevitable reckoning (read COLLAPSE).

Now, contrary to what some people believe, debt is not evil if it’s kept within limits. As long as debt can be serviced it can be a useful way to lubricate and grow economies. However, the level of debt is now so great not only will it never be paid off but it cannot even be serviced anymore. Collectively, the globe is beyond the Point of No Return. It’s only a matter of time before some event triggers the inevitable collapse.

And, when it happens, there’s going to be a lot of finger-pointing. Everyone will wonder why we didn’t see it coming and why we didn’t do anything to prevent it. Don’t be surprised at the scale of our delusion. Just don’t get caught in it.

We’re running out of investment vehicles. The stock market is rigged and corrupted by bankster’s insider trading, high frequency trading and front running. The commodity markets are shutting down because regulations aren’t being enforced (MF Global). Brokerages and hedge funds are closing (at least the honest ones). Bonds are next to fall.

So there are few places left to invest:

2) Cash hidden under the mattress (get out of U.S. banks, they’re all insolvent)

3) Gold & silver. Prices will be volatile but they retain their buying power

4) Toilet paper. I kid you not. Start stockpiling by buying durable things you will eventually need. If worse comes to worst, they’ll be barter items.

Keep your friends & family, your health, your sanity and a good sense of humor. You’ll need them. And, turn off that stupid TV and get a life. You’ll need that, too.

Your comments are WELCOME!

If you like what you’ve read or not, please “Rate This” below.

Lengthy comments may time-out before you’re finished so consider doing them in a word doc first then copy and paste to “Leave a Reply” below.

I have a bit of financial experience having invested in stocks in the 1960s & 70s, commodities in the 80s & commercial real estate in the 90s (I sold in 2005.) I'm back in stocks. I am appalled at our rapidly deteriorating global condition so I've written articles for family, friends & colleagues since 2007; warning them and doing my best to explain what's happening, what we can expect in the future and what you can do to prepare and mitigate the worst of the economic, social, political and nuclear fallout. As a public service in 2010 I decided to create a blog accessible to a larger number of people because I believe that knowledge not shared is wasted.
View all posts by gerold →
This entry was posted in Collapse 2011, Economic Collapse and tagged collapse, Economic Collapse, elections, financial crisis, Food Stockpile, Great Depression, investing, sovereign default, unemployment. Bookmark the permalink.