The new U.S. Fed Chairperson, Janet Yellen, is even more dangerous than outgoing Ben Bernanke who at least was cunning enough to “get out of Dodge”. He was also cunning enough to start tapering (reducing) QE (Quantitative Easing’s endless counterfeiting and currency debasement) for plausible deniability. This way, when tapering fails, it’ll be on Yellen’s watch.

Yellen’s inaugural announcement demonstrates that the more things change, the more they stay the same. Except she’s going to do EVEN MORE of the same. The Daily Bell writes, “Mrs. Yellen practically bent over backwards to reassure Wall Street that the Fed would continue its accommodative monetary policy well into any new economic recovery.”

Pardon me, but isn’t the definition of insanity “doing the same thing over and over and hoping for a different result”? Yellen is clearly as insane as Bernanke and their ilk of befuddled neo-Keynesians. Even Keynes admitted that massive government intervention was a temporary, not permanent fix. Yet, these academic idiots have been at it for five years. That’s NOT temporary. That’s a sign of utter failure.

Ron Paul sums it up well. “The same monetary policy that got us into this mess will remain in place until the next crisis hits.”

“Isn’t it amazing that the same people who failed to see the real estate bubble developing, the same people who were so confident about economic recovery that they were talking about “green shoots” five years ago, the same people who have presided over the continued destruction of the dollar’s purchasing power never suffer any repercussions for the failures they have caused? They treat the people of the United States as though we were pawns in a giant chess game, one in which they always win and we the people always lose. No matter how badly they fail, they always get a blank check to do more of the same.”

Jim Rickards also pointed out the absurdity of Yellen’s platform. She paid lip service to long term structural problems such as long term shifts in the economy causing long term unemployment, the lowest labor participation rate in 35 years and the demographics of retiring baby boomers. She then segued right into monetary policy because that’s all these neo-Keynesians understand. They’re one-trick ponies doing the same futile stunt over and over again. 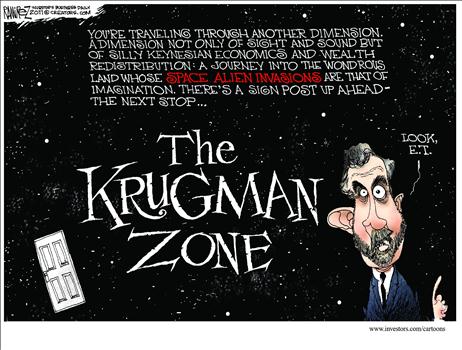 You don’t need to be a rocket scientist to know that the monetary policy that she and her ilk keep pushing can only alleviate short term cyclical problems like regular business cycles and related to demand. Yet here we are, suffering long term structural problems which can ONLY be fixed with fiscal and regulatory policies which a spineless Congress is incapable of enacting.

Below in graphical form is an example of a long term structural problem. Large corporations are not the drivers of employment. In fact, many retailers and financials institutions are announcing lay-offs again. The creators of job growth are small businesses. New businesses are the real engine of economic growth and job creation. The long term trend in new businesses is clearly down. 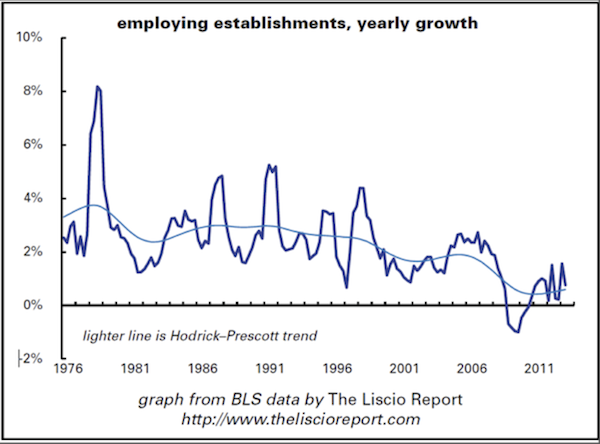 Rickards says “The Fed has been using monetary easing for five years and it hasn’t really worked.” No kidding! Five years, bursting bubbles and the loss of millions of homes and jobs; the Daily Bell concludes “Monetary control by the few over the many evidently and obviously is no panacea. Technocrats, no matter how bright or scientific, cannot administer an economy’s money any better than the market competition.”

“Anyone who doubts this simply needs to look at what monopoly central banking has done to the US economy in the 100 years of its existence. The dollar is degraded beyond measure, whole US cities are sinking into bankruptcy, the infrastructure in many places is in virtual ruins, 50 million are on food stamps, some 30 percent of willing workers cannot find jobs, etc.”

With each crisis, the Fed expands its actions with increasingly diminishing returns and ever larger bubbles painfully bursting. So, if you think the last so-called ‘Great Recession’ was painful; you ain’t seen nothin’ yet. Janet Yellen is engineering the bust of a lifetime. No pun intended. 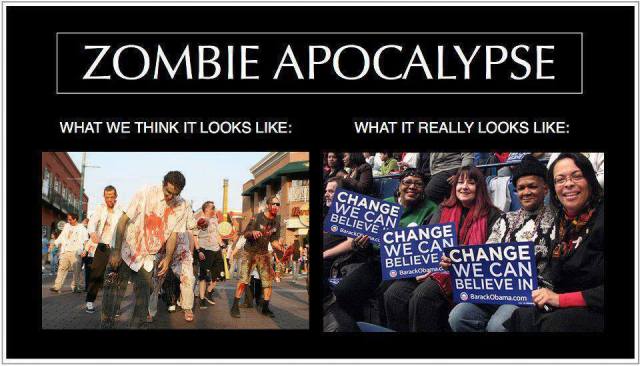 By the way, am I the only member of the ‘baby boom’ generation forever perturbed by that stupid term? Why did we ever adopt a moniker that sounds like exploding infants?

Prediction: before the year is out, tapering will stop and a new round of QE will start again, except of course with a different name so as not to admit that they keep screwing up. More than five years of QE hasn’t worked so of course they’ll do more. Like I said; insanity.

I have a bit of financial experience having invested in stocks in the 1960s & 70s, commodities in the 80s & commercial real estate in the 90s (I sold in 2005.) I'm back in stocks. I am appalled at our rapidly deteriorating global condition so I've written articles for family, friends & colleagues since 2007; warning them and doing my best to explain what's happening, what we can expect in the future and what you can do to prepare and mitigate the worst of the economic, social, political and nuclear fallout. As a public service in 2010 I decided to create a blog accessible to a larger number of people because I believe that knowledge not shared is wasted.
View all posts by gerold →
This entry was posted in Collapse 2014, Economic Collapse and tagged Ben Bernanke, Janet Yellen, monetary policy, neo-Keynesians, QE, tapering. Bookmark the permalink.