Ukrainians Are Their Own Worst Enemy – Behind the Uprising

The presstitutes’ propaganda about the events in the Ukraine masks the real reasons behind Ukraine’s so-called ‘civil unrest’. Since this is a bunk-buster blog, let’s bust some ass media bunk.

Some people, especially Ukrainians, won’t like what they are about to read. That’s their problem, not mine. I don’t pull my punches, I don’t kiss ass, political correctness disgusts me and my Ukrainian friends will roll their eyes as they’ve heard this before and no one’s refuted it yet. You’ve been warned so keep that in mind if you’re tempted to ‘shoot the messenger’ just because you don’t like the message.

Anyone who has ever played the board game “RISK”, the ‘World Conquest Game’ knows that it is impossible to hold the Russian/Asian landmass. You can capture it, but you cannot hold it for long. It is the battleground of nations. It is surrounded by enemies. Armies march through it like a hot knife through butter.

In real life, Russia has been attacked by Hitler, Napoleon, Charles XII of Sweden, the Vikings, Genghis Khan, the Mongols and numerous others. The Soviet Union was formed with captured nations forming a safety buffer around Russia. With the break-up of the Soviet Union, Russia was once again laid bare and vulnerable. This is where we are today.

History and geography has bred Ukrainians who are not very bright. To understand this admittedly provocative statement, it is necessary to compare and contrast two different peoples: Ukrainians and Jews.

First, the Jews. Historically, the land inhabited by the tribes of Israel was at the crossroads between the two ancient empires of Egypt to their west and Babylon to their east. When one empire marched to war with the other, they passed through Israel. The dry scrubland of Israel was undesirable to either empire except as a source of conscripts for their armies and manpower for their economies.

Both Babylon and Egypt sacked and destroyed Israel. Both empires had a surplus of their own farmers and shepherds so they had no use for Israel’s which were scattered or put to the sword. However, Israel’s best and brightest were captured and carted off to enrich each empire’s economy with tradespeople as well as administrators. Having eliminated the dummies from the gene pool and captured the smart Jews, the smart ones bred with other smart ones over many centuries to produce today’s brighter-than-average Jews.

The exact opposite happened in Ukraine. The land of what is today Ukraine is very rich and bountiful. Legend has it you could plant a stick and it would blossom. Ukraine became the ‘bread basket’ of one empire after another over thousands of years. Serial cereal, so to speak.

Since an abundance of intelligence is not required to sow and reap grain, the best and brightest were superfluous to that region’s masters. In fact, anyone with brains was considered dangerous as they were more likely to foment trouble and rebel against their overlords. Unnecessary and dangerous, the brightest were eliminated from the gene pool.

In fairness, it’s not the Ukrainians’ fault that they’ve been ‘dumbed-down’ unlike Amerikans who willingly allow their so-called education system to make them dumber and dumber. Ukrainians are simply the victims of centuries of history and geography.

I’ll admit that this is very broad-brush generalization. Not every Ukrainian is dumb just as not every Jew is smart. But we are talking generalities and in general, today’s Ukrainian protesters are not very bright especially when you consider the circumstances outlined below. Keep reading.

Paul Craig Roberts says “Most people want to be told what they want to hear. Consequently, they are always gullible and their illusions and self-delusions make them easy victims of propaganda.”

Witless Ukrainians received ample warnings but they chose to ignore them. Victoria Nuland, the Amerikan Assistant Secretary of State admitted that “We have invested more than 5 billion dollars to help Ukraine to achieve these…goals.” Which goals? Keep reading.

In the video below, Nuland says “the support of the people in this room is absolutely essential, we thank you for all you are doing, we thank you for your partnership all these years and we look forward to continuing to stand shoulder to shoulder with you as we take Ukraine into the future it deserves”

And, who are “the people in this room” that she addresses? They are none other than Amerikan military-industrial oligarchs who Roberts calls, “the people who will be enriched by the looting and by connections to a Washington-appointed Ukrainian government.” Once admitted into the EU, the Ukraine would get “the future it deserves” by being “helped” by the IMF which Roberts describes as “the iron hand of the West that will squeeze all life out of Ukraine’s struggling economy.”

Any Ukrainian paying attention to the IMF’s past dealings should understand the trap they are willingly walking into. However, they don’t understand. They are gullible and easily mislead. Roberts says the protesters “are determined to destroy the independence of Ukraine and to place their country in the hands of the IMF so that it can be looted like Latvia, Greece and every country that ever had an IMF structural adjustment program.”

Their gullibility verges on suicidal. The German newsmagazine, Der Spiegel says “Militant nationalists in the west of the country have gone time and time again into battles they can’t win. After World War II, the Ukrainian Insurgent Army waged a senseless partisan war for five years against the Soviet state, leaving thousands dead on both sides.”

Gullible Ukrainian protesters don’t understand that they are simply pawns in a new Cold War with the U.S., the EU and NATO on one side and with Russia and Gazprom on the other. If Ukraine embraced the west and allowed U.S. bases on Russia’s frontier, it would put Russian in an untenable defensive position.

Getting very little ass media attention is oil and gas which account for a significant part of Russia’s GDP so Russian President, Vladimir Putin must keep the pipelines flowing. The map below from Zero Hedge shows how much Europe depends on petroleum flowing from Russia through Ukraine. 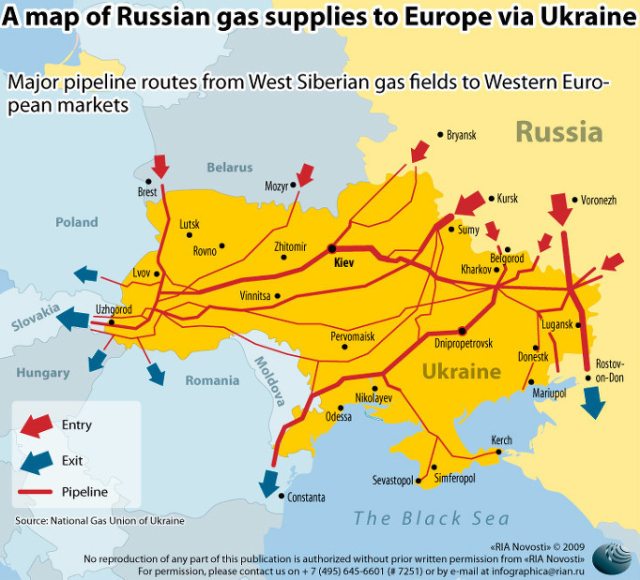 A further sign of Ukrainian gullibility is the likelihood of civil war and the splintering of Ukraine into east and west. The western side of Ukraine wants to join the EU where, they mistakenly believe, the streets are paved with gold and there is no corruption.

The corruption in Ukraine is a blatant, everyday fact of life where one must bribe the police, teachers, doctors, etc. They don’t understand that in the EU and especially in the U.S., the corruption of the oligarchs is far more insidious, reaching far higher levels, where each politician with hundreds of lobbyists are bought and paid for and where entire populations are sold out to the banksters and corporations.

Having once been an avid hunter, I’ve said many times that the most dangerous animal is a wounded one. With the wounded Amerikan Empire slowly crumbling along with its petro-dollar reserve currency, the U.S. is lashing out at the weakest nations that refuse to kiss Uncle Sam’s ass.

John Kerry and others are proposing sanctions against Ukraine. The psychopathic Senator John McCain met with Ukrainian opposition groups to stir them up and promise them U.S. support. Ukrainians just don’t get it. How many times has the U.S. promised to support one uprising after another only to leave them in the lurch? The U.S. has surpassed even the record of France. Gullible Ukrainians will be the next victims.

We’re supposed to believe the propaganda video below is from the grass roots.

In fact, A Whisper to a Roar http://www.youtube.com/user/awhispertoaroar/about says it was inspired by Larry Diamond whose bio firmly puts him in the ranks of the Amerikan Power Elite. Not very grassy roots, those.

Ukraine is fragile and gullible. The hypocritical Obama regime is enticing the ultra-militant, ultra-nationalist western Ukraine into putting their entire country in a precarious position by seeking ties with the EU. However, Ukraine’s south and east has the most industry, a large Russian population leaning toward mother Russia and the Russian Naval port Sevastopol on the Black Sea.

Vladimir Putin and his system of power do not want a civil war on his doorstep but the Amerikans are doing everything to foment one. On the other hand, Putin has played the empty-suit Obama like a fiddle, recently making the Amerikans back down from a Syrian invasion. Don’t put it past Putin to take advantage of a Ukrainian move toward secession by supporting the east and south Ukraine while the U.S. and EU support the west. That would give Russia a strong buffer and leave Obama looking foolish once again. Not that the presstitute propaganda will ever admit it.

And so it goes. Agreements will be reached today and broken tomorrow as the New Great Game goes on and on …

So don’t believe the crap you’re fed by the ass media. Especially, if you’re Ukrainian.

I have a bit of financial experience having invested in stocks in the 1960s & 70s, commodities in the 80s & commercial real estate in the 90s (I sold in 2005.) I'm back in stocks. I am appalled at our rapidly deteriorating global condition so I've written articles for family, friends & colleagues since 2007; warning them and doing my best to explain what's happening, what we can expect in the future and what you can do to prepare and mitigate the worst of the economic, social, political and nuclear fallout. As a public service in 2010 I decided to create a blog accessible to a larger number of people because I believe that knowledge not shared is wasted.
View all posts by gerold →
This entry was posted in News & Views and tagged IMF, John Kerry, John McCain, Obama hypocrisy, Paul Craig Roberts, Russian oil, Ukraine, Ukrainian gullible, Ukrainian uprising, Victoria Nuland, Vladimir Putin. Bookmark the permalink.