There were earlier reports of bin Laden having died of kidney disease. Apparently he required frequent kidney dialysis. Tough to do living in a cave.

Sure, I’m going to believe a White House press release (sarcasm off, now.) Let’s see, the Americans supposedly killed bin Laden then dumped him into the sea. Supposedly this was to uphold the Muslim tradition of burying a body within 24 hours. Dumping him into the sea is hardly a burial, now is it? And, since when did the American authorities respect Islamic tradition?

I’m not the only one a bit suspicious. The Daily Bell’s Anthony Wile says, “This is what the US did with the world’s most wanted terrorist. They dropped him into the sea?”

Supposedly they deep-sixed him to avoid burying him on land where it would attract followers to his shrine. So why not bury him in the Rose Garden at the White House? It’s already the most well-guarded house in the U.S. so I can’t see too many Al Qeda making that pilgrimage and coming out alive. The Prez could blow them away while relaxing in the hot tub.

They can’t stop his followers building a shrine somewhere. There’s a pseudo shrine of Michael Jackson, the child molester, built in front of the Hotel Bayerischer Hof in Munich where his fans leave flowers and photos of him.

We’re told that DNA evidence confirms his authenticity. Uh, huh! And where did they get the control DNA to match the body’s? Oh, right – bin Laden used to be employed by the CIA. No doubt they had DNA stored for just this eventuality. The American people must be really stupid if they believe this shit.

Let’s see – the Americans can find one mad cow in a herd of millions but it took ten years to find bin Laden “hiding in plain sight” next door to a country it has invaded. If I were American, I’d seriously question my government’s ability to keep me safe.

And, why now? I mean they supposedly suspected that mansion where he was shot in Pakistan as much as eight months ago. Let’s see – a month to confirm, another month to train the Navy Seals … so why wait eight months? Unless this is a prelude to admitting the war in Afghanistan is lost – oops, I mean is WON and now that bin Laden is supposedly dead the Allies can retreat – oops, I mean march home victoriously. 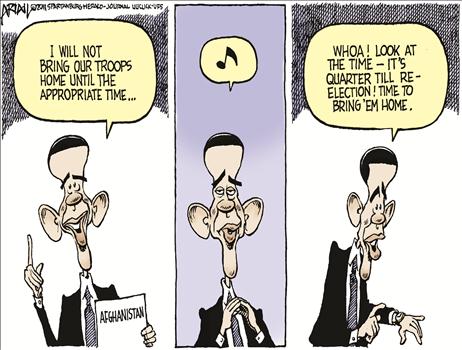 A contributor to Tyler Durden’s “Zero Hedge” says, “Hitler died on May 1, 1945 and there have been arguments ever since about the physical evidence of his death. Osama Bin Laden, apparently died on May 1, 2011. Fifty years from now “experts” will still be arguing about the evidence relating to his death as well.”

Consider how many Elvis sightings there are. So without bin Laden’s body as conclusive proof, they can keep resurrecting bin Laden as a boogeyman forever and keep us in a perpetual state of fear.

.
Your comments are WELCOME! Lengthy comments may time-out before you’re finished so consider doing them in a word doc first then copy and paste to “Leave a Reply” below.
.

I have a bit of financial experience having invested in stocks in the 1960s & 70s, commodities in the 80s & commercial real estate in the 90s (I sold in 2005.) I'm back in stocks. I am appalled at our rapidly deteriorating global condition so I've written articles for family, friends & colleagues since 2007; warning them and doing my best to explain what's happening, what we can expect in the future and what you can do to prepare and mitigate the worst of the economic, social, political and nuclear fallout. As a public service in 2010 I decided to create a blog accessible to a larger number of people because I believe that knowledge not shared is wasted.
View all posts by gerold →
This entry was posted in News & Views. Bookmark the permalink.