What Good is a University Education?

An interesting meme (social theme) is emerging lately questioning the value of a university education. Admittedly, there have always been questions about this but; the issue has taken on greater importance lately. The “Occupy Wall Street” movement is partly responsible for the emergence of this meme.

It seems a lot of students are starting to feel they have been sold a bill of goods. Get a university education, get a well-paying job, pay off your exorbitant student loan and live the good life. If you aren’t the least bit skeptical about that last sentence, you might have fallen for this gambit as well.

It’s true that university graduates earn more than those with a high school diploma who, in turn, earn more than high school drop-outs. This, however is a statistical average and doesn’t account for some very interesting exceptions such as Bill Gates and Steve Jobs. And, it’s probably truer historically than it is today; 5 years into our Greater Depression That-No-One-Admits-To (TNOAT) and will likely continue for another 15 years or longer if the last two Great Depressions are anything to go by (1873 – 1896, 1930 – 1947). 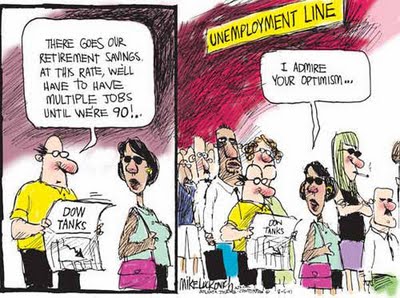 .
An ailing economy’s stubborn refusal to emerge from the last downturn has decimated jobs. Consequently, many recent university graduates are unemployed and doubting the benefits of a university education.
. 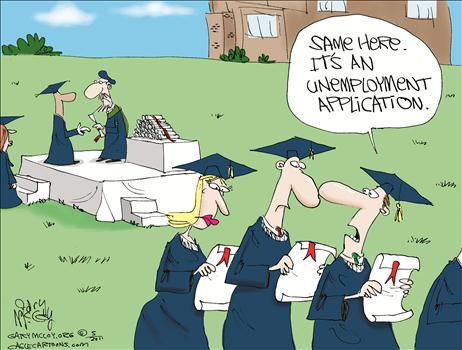 A truism I just invented (I doubt I’m the first) is that humans have much difficulty determining cause and effect. Quite often people mistake results or symptoms as a root cause. That being the case, many recent graduates disparage their university degrees because they cannot find gainful employment. However, that is a reflection of our economy and the Greater Depression TNOAT and not a reflection of a university education. They may have acquired university degrees but that doesn’t mean they acquired critical thinking skills. It may also be a reflection of our dumbed-down education systems. And, don’t let me start ranting about the boob tube.

Even such stalwarts as Doug Casey, whose libertarian ideas I admire, has very little appreciation of a university education. However, Doug doesn’t realize how much of an autodidact (self-taught) that he is. I am blessed with an imagination where I can see how things are not and I can imagine how things could have been. I can imagine how Doug, with his intelligence and skepticism would have been even more brilliant under the tutelage of excellent professors. We’ll never know how much so.

Even Casey Research’s Gary Gibson believes that only the “hard sciences” are worthwhile and remunerative. However, one reader commented that the training that engineers and scientists get is not a true “education” but more of an apprenticeship. Higher education teaches critical, analytical and skeptical thinking skills that are not necessary for engineers and most scientists with the exception of research science.

One of the goals of the Occupy Wall Street movement is for the government to forgive their student loans. Good luck with that. I’m still wondering about the sanity of those who take on a $100,000 student loan regardless of the economic climate.

However, until this OWS movement, I’ve never known anyone who regretted their university education. My experience has been that those who disparage university fall into one of two categories:

1) Those who do not have a university degree I suspect may be blessed with a mixture of both ignorance and envy.

2) Those who are not capable of acquiring a university degree or who dropped out, I suspect they may have a case of sour grapes.

This is in no way meant to disrespect those lacking a university education. A degree takes a lot of money and time. University was never meant for everyone. Many jobs require training but not education. You don’t need a PHD to fly an aircraft but passengers certainly appreciate a pilot with considerable flight training. I doubt a garbage collector with a university degree would make a happy worker but I could be wrong. A degree may benefit him personally but I doubt it would help him do his job or give him much job satisfaction. It’s been said that an unexamined life is not worth living but, I suspect some people avoid looking too deeply for fear of finding nothing.

The main purpose of Primary and Secondary (High School) education aside from teaching the basics like reading, writing and arithmetic is to teach us how to learn. Aside from the basics, it matters little what we learn because we’ll forget most of it anyway. Learning how to learn is important because we spend the rest of our lives learning.

The main purpose of a liberal arts/humanities university education is learning how to think; not WHAT to think but, HOW to think by which I mean critical thinking, analytical thinking and skepticism. This is important because we spend the rest of our lives inundated with ideologies, slogans, propaganda, myths, religion, advertising, statistics, mass media, politicians and shysters trying to take advantage of us. We need to be able to discern fact from fiction, reality from fantasy and beneficial from harmful intent.

Higher education is an expensive luxury. I will never regret my liberal arts education even if it never makes me another nickel because it has taught me how to think. I do not regret being able to think. It’s been said the world is a comedy to those who think and a tragedy to those who feel. I’d rather laugh than cry.

Although a Bachelor’s degree is the new High School diploma, many employers insist on a university degree because it shows the applicant is trainable. And, in today’s complex and fast changing world, if you have a job where you aren’t constantly learning something new then your job will either become obsolete or replaced by a robot.

Postscript – much has been written about Steve Jobs since he died. Yes, he died. He didn’t “pass” or some such stupid euphemism. Politically correct euphemisms disgust me. You pass a grade in school or you pass a car on the highway. You don’t pass gas; you fart. And you don’t pass away; you die. People who are afraid to face themselves and life (or death) use euphemisms to bury their head in the sand.

Steve Jobs faced life head on and he wasn’t afraid to fail. Although he was a university drop-out, he valued the liberal arts and the humanities. Paul Wells of Macleans magazine “Freedom to fail is what made Steve Jobs” Oct. 24, 2011 where he comments on Jobs marrying technology with the liberal arts that made Apple successful. Wells said, “It was a direct rebuttal to Bill Gates’ belief that schools should aim to educate students in fields that ‘produce jobs’. Jobs believed rightly that nobody could know anymore at 20 which field will ‘produce jobs’ when he’s 40, so it’s better to just try to become a good person, in the way Aristotle would have understood that term.”

I too, agree with Steve Jobs. If you want to pursue an education that produces jobs, learn a trade. Demographics and retiring Boomers will rewards the trades. However, if you aren’t sure about the future, get an education that trains your mind to be open and flexible and you’ll not only learn what you love but you’ll be able to roll with the punches as well as identifying and capitalizing on the opportunities that arise.

I have a bit of financial experience having invested in stocks in the 1960s & 70s, commodities in the 80s & commercial real estate in the 90s (I sold in 2005.) I'm back in stocks. I am appalled at our rapidly deteriorating global condition so I've written articles for family, friends & colleagues since 2007; warning them and doing my best to explain what's happening, what we can expect in the future and what you can do to prepare and mitigate the worst of the economic, social, political and nuclear fallout. As a public service in 2010 I decided to create a blog accessible to a larger number of people because I believe that knowledge not shared is wasted.
View all posts by gerold →
This entry was posted in News & Views and tagged bill gates, education, Great Depression, high school diploma, high school drop outs, Occupy Wall Street, school drop outs, steve jobs, university degree, university education. Bookmark the permalink.

4 Responses to What Good is a University Education?